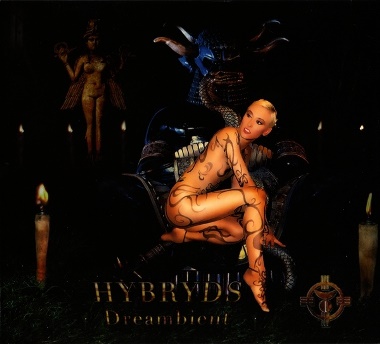 HYBRYDS is a Belgian ritual-esoteric project, which in the early 90-s released it's most significant album "Music for Rituals" on the cult label Artware run by Donna Klemm (R.I.P.). They have reached the peak of creativity in 90-s with their classical discs "The Ritual Should Be Kept Alive" parts 1 & 2, "Soundtrack For The Aquarium", recorded for the Antwerp water park, "Dreamscapes From A Dark Side", "Tectonic Overload". In 2000 the female member of HYBRYDS, Yasnaia, leaves the band, and Magthea is busy with his project NA-DHA for some time.

The new album of HYBRYDS, "Dreambient" is based on exploration of the female characters from the Pagan past: archetypes of the seducer, the demon, the girl, the whore, the slave, the mistress, the priest, the mother... The music of the project has become more accessible for uninitiated listeners: traditional ambient-ritual basis is enriched with rhythmic electronics, melodic synthesizer tunes and even guitar parts. Vocals are now done by Madeline Arndt from the German darkwave/gothic band Schattenkinder.