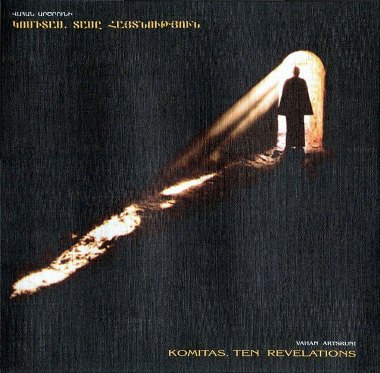 ...Winner -"Best Alternative Folk Album" & "Best Album Cover and Design" of the 6th Armenian Music Awards, 2004
...Vahan Artsruni first came to attention in 1984 in the band of a legendary Armenian minstrel and rock musician Arthur Meschian. Working with Meschian shaped his taste and style, enabling him to develop various forms of Art Rock. Before his musical career, he graduated the Yerevan State Medical Institute and got his Master's Degree in 1991. Soon after Vahan entered the Yerevan State Conservatory in 1995 majoring in vocal with the great Armenian singer Gohar Gasparian. Subsequently, he was soloing with "Narek" Male Choir from 1989 to 1994 and in 1993-1994 at the State Academic Cappella of Armenia and "Haysmavourk" Medieval Choir. Upon his return from the Army in 1997, having collected huge material, he gave concerts with the Armenian National Symphonic Orchestra representing his instrumental cycle "ETHNOPHONICAî, a suite, at the Aram Khachaturian Big Concert Hall. In 1999 he presented a chamber cycle "Komitas. Ten Revelationsî having composed the music based on the poetry of the great Armenian composer and ethnomusicologist Komitas Vardapet. 1999-2002 were very prolific for Vahan. He made numerous concerts participating in various projects. Naregatsi Chamber Orchestra and ìSHOGHAKATî choir performed his chamber music. In the year 2000 Vahan created a progressive music band called ARTSRUNI. With the graceful melody of the flute, elegant guitars, solid bass and drums.