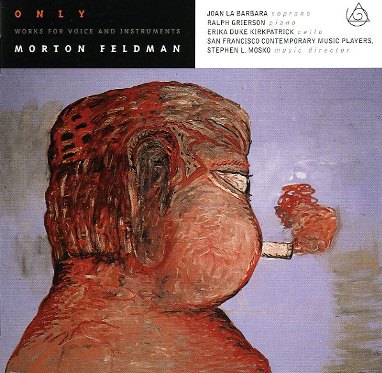 In 1988, the Holland Festival presented a John Cage musicircus from various locations around Amsterdam and in addition to several of Cage's works, in memorium to Feldman who had died the previous autumn, I was asked to sing "Only." I sang it for the first time on June 23, from the roof of the State Opera House on the Leidseplein, at midnight, in the rain. I am sure only the angels heard it... and, perhaps, Morty. It is so uncharacteristically brief and so openly poignant that I wanted to find out more about the circumstances surrounding its composition. The manuscript I had gave the publishing copyright date as 1976, but none of Morty's friends or students from around that time could shed any light on its mystery. It remained an enigma until I learned that it had been written when Morty was just 21 years old, in 1947. For me, Rainer Maria Rilke's text is an eloquent epitaph for a soul flown too soon.
In choosing the other works for this collection, I wanted to explore Feldman's interest in using the voice as an instrument and discovered the kernel of ideas that he later expanded in depth and at greater length. In the voice leadings and intervallic tunings of the three lines of "Voices and Cello" are moments that presage "Three Voices". Structurally delineated by chordal pillars, each bearing a single word of the spare but chilling text, "Life is a passing shadow", the delicate percussion rumbles and strokes of "Vertical Thoughts 5" found further extension in the "The King of Denmark"... (etc.)
For those who have enjoyed the late works of Feldman that have appeared on recordings like sudden flowers after a rain in the desert, this collection offers a glimpse of earlier pieces, helping to paint a more complete portrait of this man whose thoughts and sounds influenced and continue to affect so many composers and musicians in the last part of the twentieth century.
--Joan La Barbara