Leonid Soybelman - SURFING IN MY BED 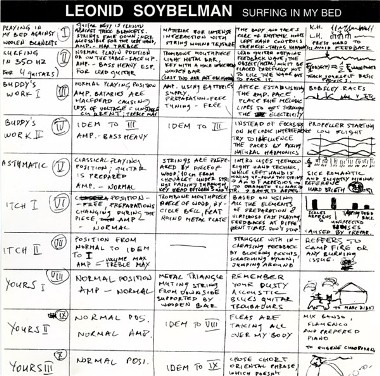 Between March and August 1997 'Surfing In My Bed' was recorded on a 4 track-recorder. It documents Leonid Soybelman's musical state of development. About three years ago he started his search for new possibilities of sounds which an acoustic guitar, a piezo-pick-up and a little amp can produce. The guitar virtuoso ended up in what was to him a rather unknown area: the sounds that occur through the unconventional but not dilettante use of electric amplification might often be viewed as something rather disturbing but here are used as the starting point of the explorations. Out of this source he created beautiful noise constructions that would please Merzbow (Soybelman didn't use any effects). Three of the pieces are dedicated to guitarists who have inspired him in one way or another: Marc Ribot, Eugene Chadbourne and Otomo Yoshihide. Ribot's comment after having heard the CD was: "Move over, Sigovia".