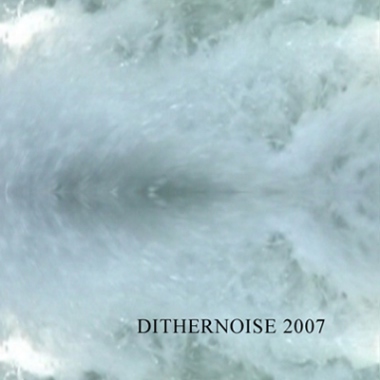 Dithernoise (aka Simon Longo) is a sound artist based in London who has been experimenting with electronic music since the end of the 1980s, with several recordings released on experimental labels. He also produces installations and videos, exploring the relationship between sound and visuals when mediated by computers.

Dithernoise 2007 contains unique work and two pieces from Longo's Untitled Ring installation soundtrack. The subject matter of each piece, as well as their style and length is varied. The first track, Electrophysical Soundscape features an evolving cloud of rumbling and buzzing, with hints of field recordings seeping through the cracks. It brings to mind an urban expanse, somehow claustrophobic but with the suggestion of a greater atmosphere beyond the visible field.

Track 2, Afro+Vox+Blue Noise is a shorter piece, using heavily processed loops of chants from a crowd. Other loops are gently introduced, finally exploding into an uplifting cacophony that brings to mind less experimental ambient music. At 16 minutes, the epic Yellow Sparks is an altogether different approach. Tactile sounds with more organised rhythms fade in and out, juxtaposed with heavier and more oppressive improvisations. Field recordings, or at least some convincing gurgling water sounds, bring the piece to a coda.

Track 4, Waveforms+Grooves is perhaps more conventional than the other pieces, with marching electronic drums and familiar filtered ambient pads. With heavy processing and what feels like improvised experimentation the relationship to mainstream ambient is kept tenuous, yet welcome all the same. Track 5, In Me, is based on a collection of frantic loops, laced with melodic chord progressions. The pace provides an interesting contrast to the other tracks, and again explores the tactile and organic essence Longo is interested in.

Track 6, Thunder Drum, has recordings from a public space woven around improvised rhythms. The drums are similar in an abstract sense to slow old fashioned taiko drumming, which adds an interesting cultural angle to the piece. Finally, Red Harmonious exists somewhere between total ethereal ambience and the subdued and thoughtful works on Pete Namlook's Fax Label, which is a fitting conclusion to Dithernoise 2007.

Dithernoise 2007 is an intriguing collection of pieces. Simon Longo is clearly not afraid to experiment with sound processing to its limits, seeking out the tactile and vivid qualities of sounds, while still able to bring in timbres and rhythmic structures usually attributed to less experimental electronic music. This combination of experimentation and the familiar is definitely welcome.