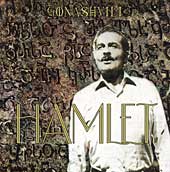 HAMLET GONASHVILI was considered the voice of Georgia. He was an outstanding soloist, influential teacher and brilliant performer of traditional Georgian music. Born in the Eastern part of the country, he was know to be the best interpreter of songs from the regions of Kartli and Kakheti. At the hight of his creative powers HAMLET GONASHVILI died in a tragic accident in 1985. He had been awarded his country's most important honours and prizes.