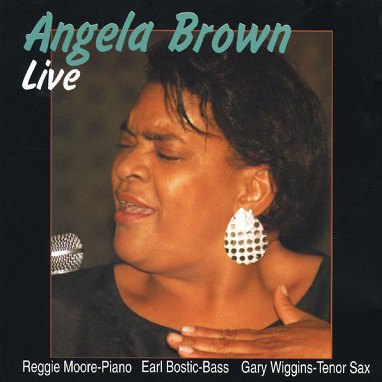 Angela Brown is certainly a Blues Diva – 'raucous, raunchy and rumbustious' are just some of the words used to describe this great singer. Born in Chicago, Illinois. Angela began her musical career by singing gospel music in church and performing with school choirs. And, although she was aware of the blues, she didn..t devote herself to singing them until around 1980, when she played the role of Gertrude 'Ma' Rainey in a stage musical. Inspired by the music, she worked, honing her craft, in numerous Chicago blues clubs, often accompanied by pianists Little Brother Montgomery, Erwin Helfer or Lovie Lee, or sharing the stage with her music friends, the likes of Blind John Davis, Pinetop Perkins, B.B. King, Georgie Fame, Long John Baldry…the list goes on. Her Debut recordings were released by the Red Beans label in 1983, and the first album under her own name was made in 1987 for the German label, Schubert Records. She was dubbed 'The Bessie Smith of the Eighties' and later the 90..s, a deserved title given her strong renditions of vaudeville blues material. Her powerful voice is also well-suited to more modern blues and jazz styles, becoming a popular attraction at festivals all over the world; not only vocally, but for her onstage presence and oomph!! Past years have seen Angela voted in France 'International Chanteuse De L'Annee 1999', and in the U.K. 'Overseas Female Artist of the Year' and her album 'Thinking Out Loud' with her English band The Mighty 45s was runner up as the UK Album of the Year 2000. 2005 CD release Angela Brown and Jan Luley's 'Wings of Blues' 2006 sees the release of Angela and her favourite 4 piece band, The Mighty 45s, new CD 'In A Dangerous Mood.' Current recording titles also include: Angela Brown – 'Live' at the blues cafe in Berlin and 'If I Had'n't Been High'