THE MUSICIANS OF THE NILE - CHARCOAL GYPSIES 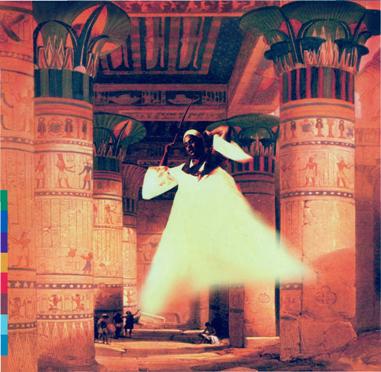 CHARCOAL GYPSIES is the latest release from Egyptian luminaries The Musicians of the Nile, a soaring, intoxicating, hypnotic effort incorporating wailing vocal ululations, dramatic percussion and the alternate trills and drones of the rabbabah. According to music magazine, Mojo, it's "One hundred years of Egyptian spirituality in one neat package", and we at Real World reckon it a natural progression on a discography that will knock your socks clean off.
Originating from the Sudan, for four generations the Mataqil have cultivated alliances with Gypsy families specialized in the art of singing. Taking this tradition as its premise, CHARCOAL GYPSIES fuses the ancient and modern with startling savoir faire. The two-stringed rabbabah assaults the senses with ear-fluttering twills as the djallabiyah-dressed, handlebar-moustachioed trio - "Hendrix of the East": Metqal Qenawi Metqal, Shamandi Tewfiq Metqal and Yussef 'ali Bakash - sing of nomadic exploits and tales seemingly straight from the pages of A Thousand and One Nights.
Frequently imitated and sometimes plagiarized, The Musicians of the Nile - lauded by the likes of Sun Ra and Keith Jarrett - have, for the last two decades, carried their majestic ancestral dream across the globe. The first "Arab music" group to win universal acclaim, Les Musiciens Du Nil (their original name, the other being for promotional convenience) have been seducing audiences since being discovered in 1975 by Alain Weber, a man who has acted as their manager ever since.
Wooing the world with concerts comprising deep gusts of spontaneity interspersed with percussive flourishes, The Musicians - true to their origins - have wandered from Paris to New York, Berlin to Stockholm and London to Montreal. They made their presence felt at 1991's Gypsy Festival of Florence and 1995's Gypsy Festival of Lucerne, and they're proud to have been part of the original WOMAD in 1983 - a debut which led to collaboration with Peter Gabriel on his PASSION album.
After albums such as MUSIC OF THE NILE VALLEY, LES MUSICIENS DU NIL, Real World Record's PASSION SOURCES and FROM LUXOR TO ISNA, CHARCOAL GYPSIES continues to fuse the Saiyidi folk music tradition of the Upper Nile Valley with the force of Africa while sounding like just the sort of thing you'd hear during the wee hours of a quality rave.