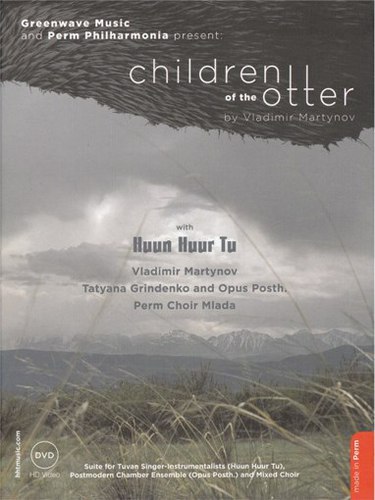 In the summer of 2008, in Moscow, Vladimir Oboronko and Alexander Cheparukhin (both of GreenWave Music), approached a renowned Russian composer Vladimir Martynovwith idea of creating a 70 minute long composition that would blend ancient instrumental and throat-singing sound of Tuvan ensemble Huun Huur Tu with a sound of contemporary chamber orchestra. Without hesitation, Mr. Martynov, who had already been familiar with Huun Huur Tu and their music, agreed to participate in the project.

By late summer of 2009 the composition had been mostly ready. It came out combining music from Huun Huur Tu repertoire with original music written by Mr. Martynov specially for the project; the composer also decided to introduce academic choir singing the poetry of the famous Russian avant-garde poet Velimir Khlebnikov (1885-1922). The project was named “Children of the Otter” after the eponymous poem by Khlebnikov

The timing for the completion of the project was perfect because earlier in the summer of 2009 Mr. Cheparukhin, well-known music promoter in Moscow, had been invited to participate in the cultural initiative of the city of Perm’. A provincial city, although “strategically” located nearby Urals Mountains separating subcontinents of Europe and Asia, Perm’ had decided to become a cultural capital of Russia. So far, Russia had two cultural capitals: Moscow and St. Petersburg - Perm’ decided to become a third capital.

Invited by the city and region’s authorities to join the cultural initiative and develop and supervise musical events in Perm’, Mr. Cheparukhin decided that “Children of the Otter”, combining ancient Asian music with contemporary European composing and performing practices, would be a perfect composition to be produced and premiered in Perm’.

The production and premiere of “Children of the Otter” was made possible through a generous support by Perm’ regional Ministry of Culture, Perm’ Philharmonia, and Perm’ Governor office.