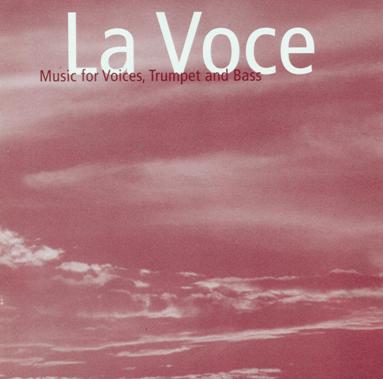 In the beginning there were the voices: three vocalists who apparently saw eye to eye on things. Norma Winstone of England, the Brazilian Rosani Reis and the Italian Giacomo di Benedetto - singers with various cultural backgrounds and varying musical experience. The conscious challenge presented by this constellation, inspired Uli Beckerhoff (trumpet) in many ways. Compositionally he struck gold in Tango and Bossa and turned his attention increasingly to song forms.

Bandleader Uli Beckerhoff has created a varied Album - on several tracks the vocal setting and double bass (Hartmut Kracht) form the harmonic foundation. Nevertheless Beckerhoff does not succumb to the temptation to use the ensemble as a coulisse for his own instrumental talents. The sound of his trumpet is emphatically song-like; many of the carefully and moderately fashioned solos have a clear melodic line, corresponding unmistakably to the overall character of the piece. Sometimes abruptly, sometimes staidly, Beckerhoff is a master at incorporating his virtuoso, slightly husky trumpet voice into the composi- tion in an entirely suitable manner.
Giacomo di Benedetto and Rosani Reis also exel in the art of "song without words". The solo and trio contributions of the three vocalists are convincing and impressive, with a repertoire ranging from the ecstatic gasp to the sensual whisper, from childlike babbling to the rhythmic sounds of the "human beatbox" otherwise found in Rap or a cappella formations. The multinational character of the quintet also influences its stylistic spectrum: Rosani provides the fire and melancholy of Brazil, Giacomo the wit and virtuosity of his homeland. He transposes the tragedy of a Sicilian drama into a tangoesque composition, demonstrates Italian joie de vivre in a Rap interlude. Norma Winstone, the sedate British lady of European jazz song, involves herself in the action with improvisation, jibing easily with the casual groove of the Brazilian pieces.

Standards are en vogue. Once set, they tend to make us blind. They keep our perception to the beaten path. With this record Uli Beckerhoff does not intend to set standards.
It does conjure up associations: with the petrillo ban (the period of the great musicians’ strike in the U.S. during the early 1940s, when only singers could appear on records as accompanists, as they were not members of the musicians' union), with the legendary soundtrack to Louis Malle's "L' Ascenseur pour l' echafaud", (engl. Frantic) (in which Miles Davis was accompanied in some passages only by a bass), with folklore imaginaire (the make-believe folklore of the country Everywhereand- nowhere, sung in make-believe languages, e. g. in Gülhan.). But meet standards? No way!

The very constellation of the ensemble-trumpet, three voices and bass- forces and allows new insight into each of the musical genres alluded to, typically labelled Tango, Jazz, Rap, Ethnopop, Belcanto, etc. The standard distribution of roles in the band has also come completely out of joint: The question 'Who is accompanying whom?' has become irrelevant. No-one is accompanying anyone, and everyone is accompanying everyone.

This is an exemplary project. Not in the sense of recommending its imitation, but rather in the sense of an independent vision. And it is not simply novelty for novelty's sake, but the logical next step in Uli Beckerhoff's development. The sequence of his groups and record titles reflect this development: Riot - Changes - Stay - La Voce, a path leading from external rebellion to the approximation of the trumpet and (Beckerhoff's own) human voice.