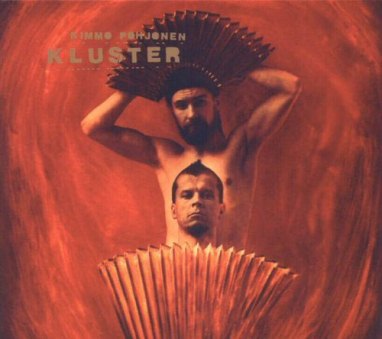 Kimmo Pohjonen Kluster is the new project by perhaps the world’s most innovative and exciting accordionist, Kimmo Pohjonen with his cohort, the sampling whiz, Samuli Kosminen.
Receiving staggering piles of rave reviews worldwide, Kimmo as a solo act and the Kluster duo are breaking full force into avant-garde, contemporary, jazz, classical, rock and world music circles with explosive concerts, featuring original music, live loops and effects, quadraphonic sound and extraordinary light shows.
Their performances and music have been called revolutionary, astounding audiences and critics alike with their uncompromising intensity and originality, all made even more incredible by the fact that all sounds are produced by or originate from Kimmo’s accordion and voice.
In Kluster, on stage and on the new recording, Samuli samples Kimmo’s accordion and voice, reproduces them percussively via his electronic drum pads, and mixes it all together with Kimmo’s accordion, voice and live FX to create a brain bursting maelstrom of "multi-dimensional" quadraphonic accordion sound unlike anything done before.