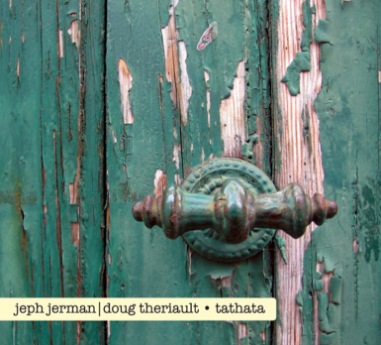 Tathata is a central concept in Buddhism, literally translated from sanskrit as "thusness" or "suchness". Tathata expresses appreciation of the true nature of reality in any given moment. As no moment is exactly the same, each one can be savored for what occurs at that precise time, whether it is thought of as being good or bad. However, Jeph Jerman and Doug Theriault are trying to give us the possibility to meditate on this word, they recorded three long improvised pieces for the same-titled album. Jeph plays acoustic sources (stones, health balls, metals, sticks etc) and Doug played guitar and processed it with his laptop. The music is very quiet, the sparse and spontaneous movements reveals the silence playing the main role between abstract sound gestures. It seems so that the musicians have no intent to produce music, which can express certain ideas or follow the process, thus it's setting free your mind and clear it from any predominant thoughts. In fact, it's a new direction of perceiving the environment, the musicians share with some sounds, originated far from the complex pseudoreality programming, it's mostly intuition. Another important step to understanding the musical ecology, to reach the point where anything can be taken apart from everything else.