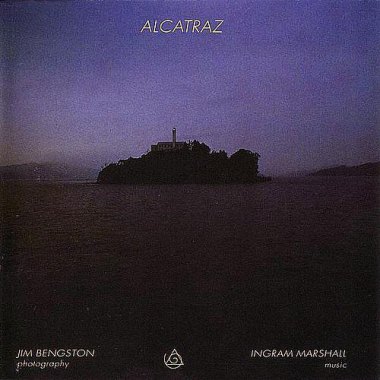 Some of the music is mesmeric, even eerie, and some is contemplative and meditational. At other times it is more insistently and rhythmically violent as befits the memory of such a forbidding and foreboding place as Alcatraz.
CD Review

Alcatraz is a truly collaborative work. I had long talked with Jim Bengston, a friend since the sixties, about the possibility of combining image with music in a meaningful way. We agreed that there had to be a subject which the photography and the music must separately illuminate; but they ought to inform each other as well. He visited San Francisco on a regular basis when I was living there in the early eighties and somehow the idea of the lonely island as a subject crept into our collecive consciousness. Jim's penchant for photographing open, stark landscapes and looming, lonely places seemed perfect for Alcatraz; it appears, in its semi-ruined state, to be an extension of the natural world which surrounds it. My fascination with the sounds of the maritime environment around San Francisco Bay, as witness my "Fog Tropes" of 1982, made the "soundscape" of Alcatraz a natural attraction for me.
Beginning in the Fall of '82, Jim photographed out on the island on numerous occasions over a period of two years, and I sallied forth on several of these expeditions with tape recorder and microphone, recording the sounds of buoys, birds and fog horns as well as singing and gambuh flute playing in some of the resonant spaces of the prison. I also captured the famous roar of the cell doors' mechanized closings - this chorus of metal echoing through the wildly reverberant spaces of Alcatraz is probably the perfect sound print of the desolation and utter finality of the place.
For me the music and pictures have always exuded meaning, although I am loath to be specific, leaving it to those regarding the pictures and listening to the music to find their own hermeneutics.
Ingram Marshall