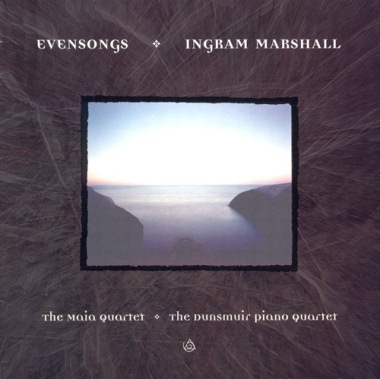 The all too familiar hymns of my childhood have come back to haunt me ... For me the research into memory is an important tool .. we are, all of us, always searching our past in an attempt to understand the present.
Ingram Marshall

The music recorded herein ranges over a twelve year period; most of it is imbued with strains which will be recognizable to many. For me the research into memory is an important tool in my compositional workshop. We are, all of us, always searching our past in an attempt to understand the present. I think this is especially useful for the artist.
The opening work, Entrada (At the River), is based on a fragment for string quartet, amplified with electronic delays, conceived in 1984; it is a process of gradually revealing itself.
The Piano Quartet (In My Beginning is My End) originated as a trio (no viola) and was written for the then Dunsmuir Trio in 1986-87. It was commissioned by my longtime friend and supporter, David Rumsey. By the time this recording bacame a possibility, the Dunsmuir had become a quartet and Jennifer Culp, the cellist, an old and dear friend, suggested that my trio might be "improved" as a quartet. And it was. The revision was done in 1995. At the time of rewriting it I was reading Elliott's Four Quartets and the title seemed appropriate.
The first movement has no conscious references in it; it was a spontaneous invention composed in rough form shortly after the birth of my son in 1986. The second movement, which might be considered a set of variations, dwells on two hymns, both quite well known.
The string quartet, Evensongs, is really a collection of pieces, hymnodic meditations, concerning the crepuscular. Its six sections are bound together in two "movements." They were, mostly, written in 1991-92 in anticipation of a workshop collaboration with the Stuart Pimsler Dance Theater in Minneapolis. Working with a local string quartet, Stuart and Susanne Costello created a dance theater work around some of the music; it was called "Hymn of Two Embraces." Also involved in that collaboration was the sculptor Carol Parker, whose intensely personal work has always been an inspiration to me; to her we owed the idea of using in the performance the chorus of music boxes, which now appear in the string quartet at several points; the child's voice, heard in these tape collages, is that of my then five year old son, Clement. In several ways, this music is about childhood, or more specifically, is a reflection on the mirror of childhood one sees in one's own children.
For those who think of me mainly as a composer of tape and/or electronic music, which is understandable in light of my discography, this music presents another side. Although there is some electronic processing in Entrada and a bit of tape collage interjection in Evensongs, this is "musica acustica." Yet, I like to think that my treatment of purely instrumental sound is not so different from that of taped and electronic sources.
Ingram Marshall

Evensongs
I.Steal Across the Sky
II. Fast Falls the Eventide
In My Beginning is My End
Total: 54:14